A review has been carried out to investigate the impact of the Covid-19 lockdown measures on local air quality.

It found notable reductions in nitrogen oxides, as traffic volumes fell to around a third of normal levels during the recent lockdown.

Various air quality parameters are measured locally, including particulates (PM10 and PM2.5), sulphur dioxide (S02) and nitrogen oxides (NOX). The review focused on NOX emissions measured using continuous, real-time analysers on the Grange (*Lukis House) and Bulwer Avenue. At roadside locations such as these, NOX concentrations will be closely linked to primary emissions and should show the direct impact of reduced local traffic on air pollution.

Nitrogen oxides (NOX) is the collective term for nitrogen monoxide (NO) and nitrogen dioxide (NO2). NOX is released into the atmosphere when fuels are burned (for example, petrol or diesel in a car engine, oil and natural gas in domestic central heating boilers, electricity generation at the power station etc.). Nitric oxide (NO) is not considered to be hazardous to health at typical ambient conditions but NO2 can affect human health. There is evidence that high levels of NO2 can inflame the airways in our lungs and this is made worse for people with respiratory conditions, such as asthma.

The review calculated the expected NOX and NO2 during the lockdown period based on historical data and making adjustments for wind and weather patterns and during different times of the day / week (due to peak traffic periods etc.). The modelled data were very similar to the actual data that were recorded in the period leading up to lockdown, suggesting that the measured NOX and NO2 was comparable to the usual levels at this time of the year and under normal business activities. The modelled (i.e. 'business as usual' or 'BAU') NOX and NO2 concentrations are predominately higher than the measured ones from 23rd March onwards (when lockdown recommendations were in place, before full lockdown

on 25th March). This strongly suggests that reduced emissions from traffic and industry are being seen in the measurements.

Data from Traffic and Highway Services, at similar locations (St George's Esplanade and St Julian's Avenue) show reductions of daily weekday traffic movements from 21778 and 12448 in February (pre-lockdown) to the lowest number of movements of 7899 and 4182 respectively during the period of full lockdown (25th March - 8th April). These represent a 64% reduction in vehicle movements on St George's Esplanade and a 66% reduction on St Julian's Avenue.

"It may seem obvious that less traffic on the roads will mean less air pollution, but it's rare we see such a change in real traffic levels, allowing us to measure exactly what impact it has. That impact is clearly demonstrated in the data. Whilst local air quality was good prior to lockdown, the data show the positive impact that reductions in vehicle movements can have on the environment and subsequently on human health." 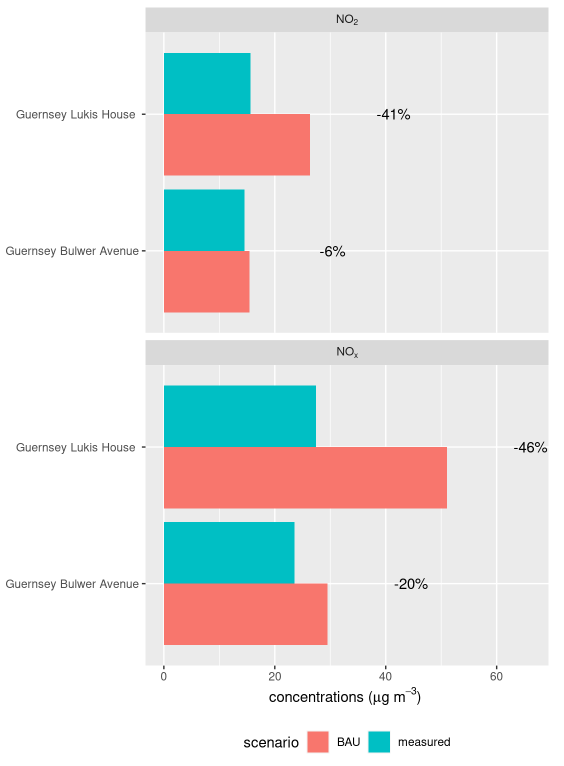 The report is available in full at http://guernseyair.ricardo-aea.com/