Historic population and employment data
Contact Us - Data and Analysis

Since as early as 1821, a census has been undertaken in Guernsey. Initially, this was done as part of the broader census across the whole of Britain every 10 years (unless there were circumstances that prevented this from happening, such as during the Second World War). The forms are securely stored for 100 years after the date of the census and the data is then made into public records. The 1911 Census is the most recent to have been published and the 1921 Census is due to be published in 2022, see https://www.nationalarchives.gov.uk/about/news/contract-awarded-to-publish-the-1921-census-online/. If you are seeking access to census data from before 1971, this webpage is a good starting point: https://www.nationalarchives.gov.uk/help-with-your-research/research-guides/census-records/. Historic census reports can be accessed from here: http://www.histpop.org/.

Every five years from 1971 until 2001 a Bailiwick census was undertaken, from Guernsey. Copies of the reports are available here. The original 1971, 1976 and 1981 census forms were destroyed in line with the requirements of the census ordinances of the time. The ordinance was amended to align with British retention protocols ahead of the 1986 Census. The original 1986, 1991, 1996 and 2001 census forms are held in the custody of the States Archivist, where they will remain for 100 years ahead of being made into public records.

The last traditional census in Guernsey was undertaken in 2001.

In 2005, a decision was taken by the States to not undertake a census in 2006, but instead to investigate the feasibility of undertaking an administrative census (using Social Insurance and Education records). Social Security produced some basic population counts by age and gender from 2006 onwards, with birth, death, immigration and emigration between each snapshot.

In 2010, the States decided to not run a traditional census in 2011 and instead to put the money towards the Rolling Electronic Census Project. The Electronic Census has been used to provide quarterly population data since March 2014, see www.gov.gg/population for the latest publications and further information.

Historic population numbers extracted from census reports can be downloaded from this page and some are displayed in the graph below. There are some gaps in the time series due to differences in the way the information was presented from one report to the next. The gaps have been populated with estimates, which will be replaced with actual figures if these become available. 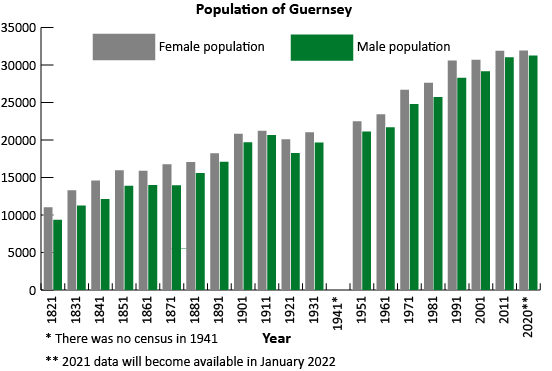